Colin Powell, the first Black US secretary of state whose leadership in several Republican administrations helped shape American foreign policy in the last years of the 20th century and the early years of the 21st, has died from complications from Covid-19, his family said on Facebook. He was 84.

“General Colin L. Powell, former U.S. Secretary of State and Chairman of the Joint Chiefs of Staff, passed away this morning due to complications from Covid 19,” the Powell family wrote on Facebook, noting he was fully vaccinated.

Powell had multiple myeloma, a cancer of plasma cells that suppresses the body’s immune response, as well as Parkinson’s, Peggy Cifrino, Powell’s longtime chief of staff, confirmed to CNN. Even if fully vaccinated against Covid-19, those who are immunocompromised are at greater risk from the virus.

“We have lost a remarkable and loving husband, father, grandfather and a great American,” the family said.

Powell was a distinguished and trailblazing professional soldier whose career took him from combat duty in Vietnam to becoming the first Black national security adviser during the end of Ronald Reagan’s presidency and the youngest and first African American chairman of the Joint Chiefs of Staff under President George H.W. Bush. His national popularity soared in the aftermath of the US-led coalition victory during the Gulf War, and for a time in the mid-90s, he was considered a leading contender to become the first Black President of the United States. But his reputation would be forever stained when, as George W. Bush’s first secretary of state, he pushed faulty intelligence before the United Nations to advocate for the Iraq War, which he would later call a “blot” on his record.

Bush said in a statement Monday that Powell was “a great public servant” who was “such a favorite of Presidents that he earned the Presidential Medal of Freedom — twice. He was highly respected at home and abroad. And most important, Colin was a family man and a friend.”

Though Powell never mounted a White House bid, when he was sworn in as Bush’s secretary of state in 2001, he became the highest-ranking Black public official to date in the country, standing fourth in the presidential line of succession.

“I think it shows to the world what is possible in this country,” Powell said of his history-making nomination during his Senate confirmation hearing. “It shows to the world that: Follow our model, and over a period of time from our beginning, if you believe in the values that espouse, you can see things as miraculous as me sitting before you to receive your approval.”

Later in his public life, Powell would grow disillusioned with the Republican Party’s rightward lurch and would use his political capital to help elect Democrats to the White House, most notably Barack Obama, the first Black president whom Powell endorsed in the final weeks of the 2008 campaign.

The announcement was seen as a significant boost for Obama’s candidacy due to Powell’s widespread popular appeal and stature as one of the most prominent and successful Black Americans in public life.

Powell is survived by his wife, Alma Vivian (Johnson) Powell, whom he married in 1962, as well as three children.

Alma Powell, who is fully vaccinated against the virus, also tested positive for Covid-19 this month, but only exhibited mild symptoms, a source close to the family told CNN. She was sent home after treatment at Walter Reed National Military Medical Center. 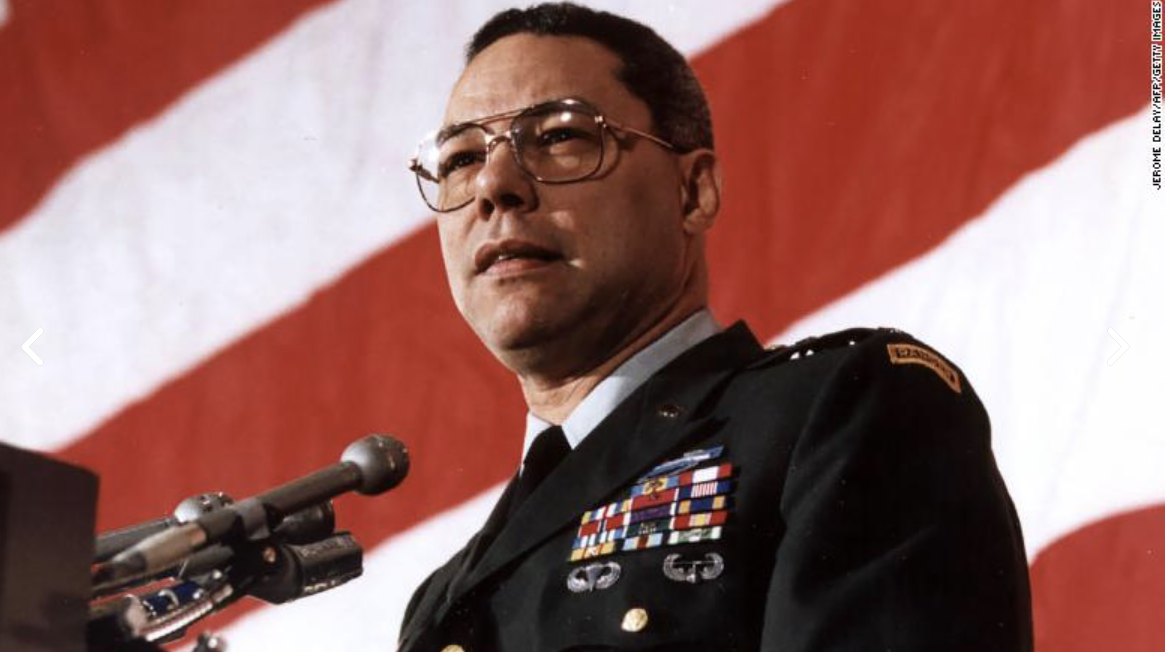 Cifrino told CNN Powell was vaccinated early on and received his second shot in February. He was scheduled to get his booster shot this past week but that was when he fell ill so he wasn’t able to receive it. Covid-19 vaccines are a highly effective tool in preventing severe disease and death, but no vaccine is 100% effective.

More than 7,000 breakthrough cases of Covid-19 that have resulted in death have been reported to the US Centers for Disease Control and Prevention through October 12. By that time, more than 187 million people in the US were fully vaccinated. That’s one out of every 26,000 fully vaccinated people who has died of Covid-19, or 0.004%.

Of those breakthrough cases resulting in death, 85% were among people age 65 and older and 57% were among men, according to the CDC.