As the world’s top athletes head into the Tokyo Olympics, a wave of penalizations and criticism are shedding light onto how Black women in sports are treated.

In recent weeks, the governing body for aquatic sports refused to approve the use of a swimming cap designed to accommodate natural Black hair during international competitions. A US Olympic hammer thrower was also criticized for protesting during the playing of the national anthem and two Namibian sprinters were ruled ineligible to compete in a race due to naturally high testosterone levels.

Those incidents, experts say, show how sports policies don’t necessarily take into account athletes of color and the dehumanization that Black women and girls experience.Policies and procedures associated with sporting events, including the Olympics are often seen as “race neutral,” said Lori L. Martin, a sociology professor at Louisiana State University who studies race and education through a sports lens. But those can impact people differently depending on their race and gender, Martin says, like in the case of the swim caps.

Days after British swimmer Alice Dearing became the first Black woman to qualify to represent Great Britain in the open-water marathon, the International Swimming Federation (FINA) refused to approve the use of the caps designed for swimmers with “thick, curly, and voluminous hair” in international competitions. The caps maker, Soul Cap, was told that their caps do not “follow the natural form of the head,” the company told the BBC.

FINA has since then said its “reviewing” the decision, “understanding the importance of inclusivity and representation.”FINA to review use of Afro swim cap at competition level after facing criticismSoul Cap founders Michael Chapman and Toks Ahmed Salawudeen had said their headwear plays a vital role in promoting racial diversity in competitive swimming and FINA’s rejection would discourage younger athletes from pursuing the sport.Swimming pools have been historically linked to racial disparities in America. In the 1920s and 1930s, public pools in the United States were mostly segregated, leading to many Black Americans not learning how to swim. 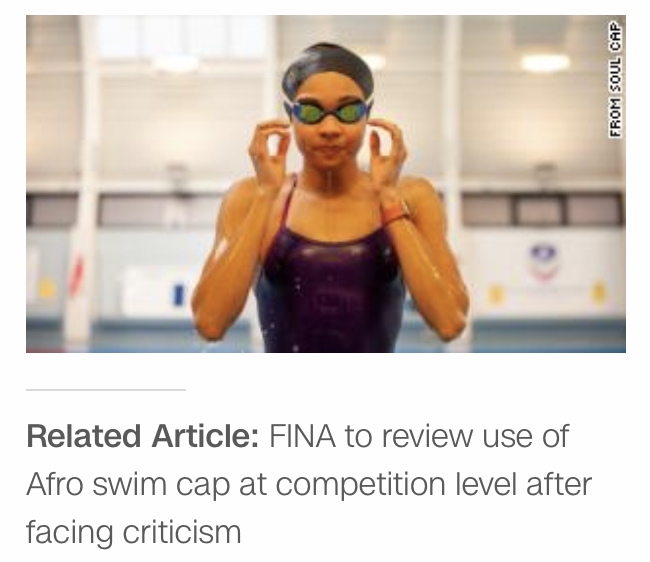 The USA Swimming Foundation says nearly 64% of African American children don’t learn how to swim, compared to 40% of White children. Advocates have been calling for more affordable swim lessons, access to pools for underserved communities and increased representation in competitive swimming. This summer, only two of the 26 women on the US Olympic swim team are Black, including Simone Manuel, who is the first African American female swimmer to win an individual gold medal.

Specific biology is keeping some out of races

Christine Mboma and Beatrice Masilingi became the latest Black women athletes ruled ineligible to compete in a race at the Tokyo Olympics due to naturally high testosterone levels. The 18-year-old Namibian sprinters were tested during a medical assessment and their levels exceeded the limit by a World Athletics’ policy on Athletes with Differences of Sex Development (DSD), according to the he Namibia National Olympic Committee and Commonwealth Games Association (NNOC-CGA). The global governing body requires that female athletes’ blood testosterone levels be under 5 nmol/L (nanomoles per liter) to compete in select women’s events, including the 400m.The committee said that neither of the athletes, nor their families, coaches or the Namibia National Olympic Committee were aware of their condition prior to testing. Mboma and Masilingi will still be able to compete in 100m and 200m events.

The same rule has sidelined other Black women athletes, including Olympic champion Caster Semenya and CeCe Telfer, a Black transgender woman who was not allowed to compete in the women’s 400-meter hurdles US Olympic trials last month. Semenya, a 30-year-old South African, has been banned from competing in any race from 400m to a mile after World Athletics ruled in 2018 that to ensure fair competition, women with high natural testosterone levels must take medication to reduce them to compete in middle-distance races.The double Olympic 800m champion is hyperandrogenous — meaning she has naturally high levels of the male sex hormone. Semenya has refused to take any medication to alter her testosterone levels and has challenged the World Athletics ruling.

She has taken her case to the European Court of Human Rights, but that process is unlikely to be completed for months.For Martin, the sociologist, those type of policies show that some people’s ideas about womanhood continue excluding groups of people and the need for more Black individuals in sports leadership.”We tend to center whiteness. We don’t necessarily think about how the rules that we might implement impact other groups because we’re thinking about whiteness and White people being the norm,” Martin said.

They are criticized for their activism

US hammer thrower Gwen Berry faced a slew of criticism from Republican Sen. Ted Cruz, Rep. Dan Crenshaw and others after she turned away from the flag while on the podium at the Olympic trials last month.After qualifying for her second Games, Berry turned away from the flag while “The Star-Spangled Banner” played during the medal ceremony and draped a T-shirt with words “activist athlete” over her head. Berry has said she had been told the anthem would be played before.In 2019, Berry lost some of her sponsorships after raising her fist in protest on the podium of the Pan American games and received a 12-month probation from the US Olympic and Paralympic Committee. She has said it was meant to highlight social injustice in America.

The United States Olympic & Paralympic Committee allowed Team USA athletes to hold up a fist, kneel, and wear garments promoting racial and social justice while taking part in all future US Olympic & Paralympic Trials events. But athletes may be subjected to international fines during the Olympics. The International Olympic Committee will be enforcing a ban, known as Rule 50, that prevents athletes from protesting or demonstrating at the Tokyo Olympics.

Rule 50 states that: “No kind of demonstration or political, religious or racial propaganda is permitted in any Olympic sites, venues or other areas.” The Rule strives to ensure that the focus at the Olympic Games remains on athletes’ performances, sport, unity and universality, according to the IOC.

Berry told CNN’s Don Lemon last week that she’s not sure whether she would observe the Rule 50 ban.